This was my most recent feedback to Google:

Please, please, please. Please, can you use ISO date format on your web site? Or at least allow dates to reflect local conditions.
Or at the very very least include the whole of the year: YYYY

Perhaps Americans can understand 4/11/19 as being m/dd/yy but for the rest of us it just looks confusing and took me a good few minutes to work out when this reply was posted.

Simply adding the whole year 4/11/2019 would help, and while DD-MM-YYYY is better & more obvious for UK users (being as it is: small-medium-large), YYYY-MM-DD is simply better all round; unambiguous, alphabetical, part of an ISO standard, and machine readable.

Please.
Please, move to ISO for your dates.
Pretty please...

PS. Please also remember not to be evil.

Ely, Winchester of the East

I've been discovering the delights of Ely with my little boy on our Wednesdays together. Having sampled most of the swimming pools in the area I seem to have settled on Ely as having about the best. The water in the learner pool is warm (I think they have underfloor heating throughout) and the pool slopes gently from zero to about one metre meaning there is a great shallow area for playing and building up confidence. The changing facilities are also quite nice and clean (and bright unlike Abbey Pool). The only down side was that when we went a fortnight ago the lifeguard was falling asleep in his chair - I was alerted by this little voice saying "Daddy, that man's sleeping" - not what you want to see from a lifeguard of a learner pool. This week he seemed well awake and we had a great time playing in the water with the floaty tube things and these armband cakes that a friend lent to us. Thinking of buying a set. After swimming we went to Waitrose for a little shop and a coffee (another key advantage of Ely over Cambridge!) and then took our picnic in the grounds of the Cathedral. We popped inside and the little guy was well impressed with the height of the ceiling and that it was painted. So much so that he was commenting on this as we talked through our day at bedtime. With warm weather we also managed some gardening time, cooking together - made a tofu stroganoff - and then a night time walk round the village.

Here are the first two batches of blackberry wine. It seems that the blackberries are out super early this year which is really exciting to see. In fact after putting the little guy to bed one night this week I was able to get out for an hours picking still in the light. It was a lovely refreshing experience, reminded me of the freedom of my Soton days. I've handled these two batches differently, on the right is my usual bread yeast, while on the right I'm trying a natural wild yeast ferment which I created by essentially making a blackberry starter - mushed blackberries and waited for it to fizz. It seems there is some visual difference between the two ferments, with the wild jar having more lees appearing in the base where as the bread yeast seems somewhat clearer. Sadly, despite my best attempts, I yet again failed to not have an explosion - the bread yeast popped over night leaving a pool of wasted juice on the counter this morning. Thankfully I didn't loose much and also didn't paint the ceiling like I did last year. 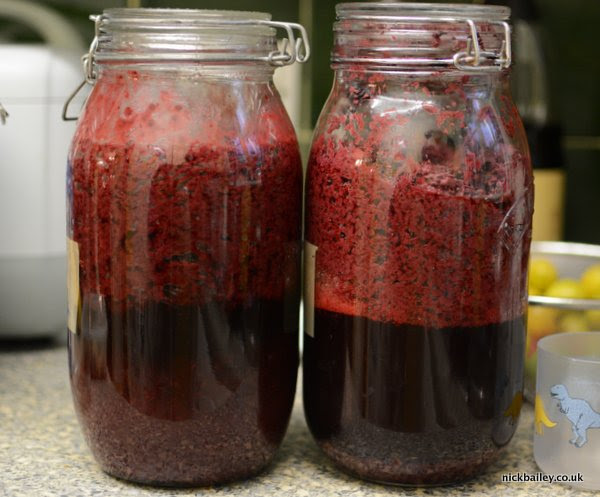 I would like to have had a little traditional walk on New Year's Day but the weather was not on my side yesterday. Even less on my side was my entire body and brain which was crashing and throwing up for a second day running. It was a pretty disastrous New Year for me. However, today was much improved - I finally woke without pain (though my knose and sinuses are still clogged) and the weather was stunning, crisp and sunny. I started slowly with some general cleaning and sorting and removal of the various vomit receptacle I'd appropriated over the previous couple of days. This cleaning was also a sort of pre-emptive DIY procrastination which I find myself doing when I have more than one project to achieve. It results in me only just starting various tasks in the hope that having started them I'll have broken the back of the effort and the rest is simply finishing off. (For example, two of the kitchen cupboard doors are now without their failing wood-effect skin).

After lunch I finally mustered enough motivation to get outside into the glorious day - yet another warm new year, warm enough to eat al fresco as it happens. I took the car out north to to hunt for a source of horse manure that I'd caught wind of - the Bridge Farm Riding School. I found it north of Cottenham and, after helping the owner locate a rogue chicken, I was shown a veritable quagmire of horse poo. "Take as much as you want, come morning, noon and night, tell all your friends" was the rather encouraging instructions. I loaded two bags of the driest materials into my boot and headed north again to a potential walk I'd seen on the map.

So here we are at the walk. Starting from the Twentypence Marina I walked East atop the levy on the north bank of the Great Ouse. I'd suggest the 'Great' is debatable - more a disappointing Cam. It was only about two kilometres to the A10 which I used to cross over the river to the South bank's levy and back along another public footpath. It was a nice walk, reminiscent of those along the River Severn, and in glorious winter sun which thankfully stayed aloft all the way back.
PS. Something went funny with my phone camera as I took the first photo, which has turned out rather like an historical artefact. 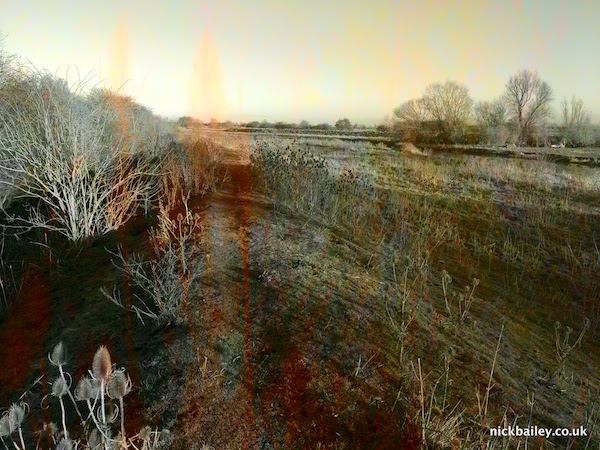 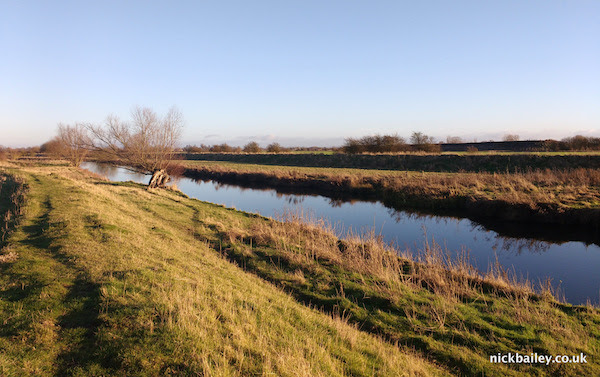 The Ouse, not as great as the Severn, only just about flowing 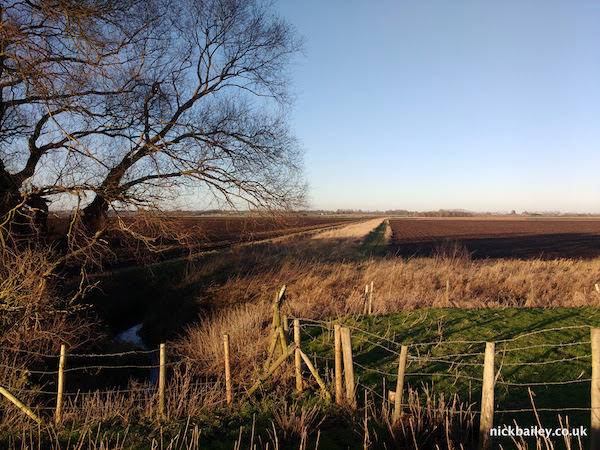 In a flat landscape you can't see for miles - those trees on the horizon are Wilburton only 3 km away. 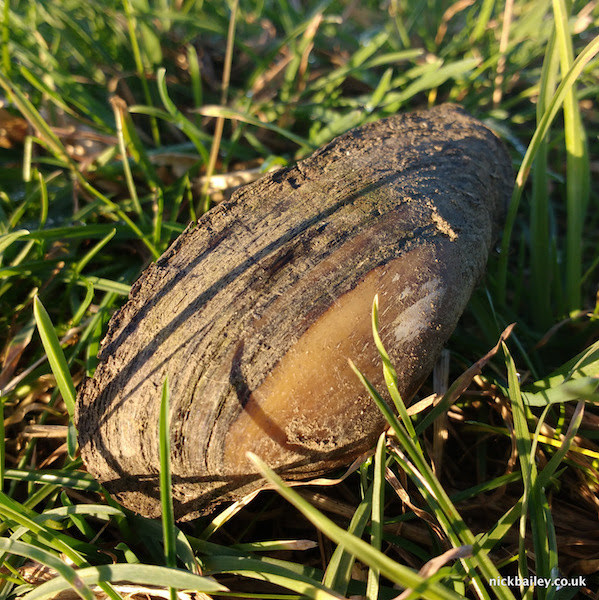 I came across an scattering of these shells, I assume fresh water shellfish collected by birds. 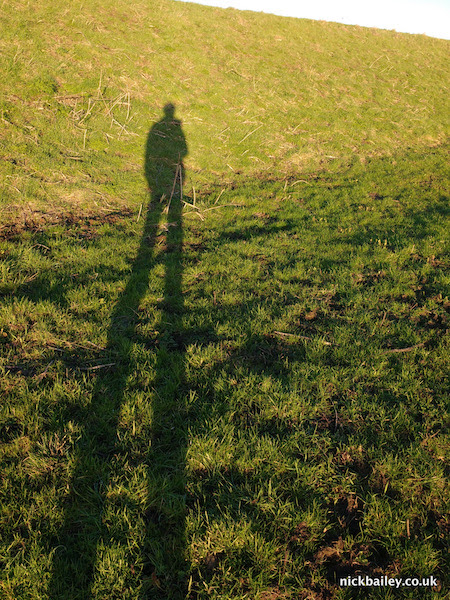 Self portrait against the levy (which was dry) 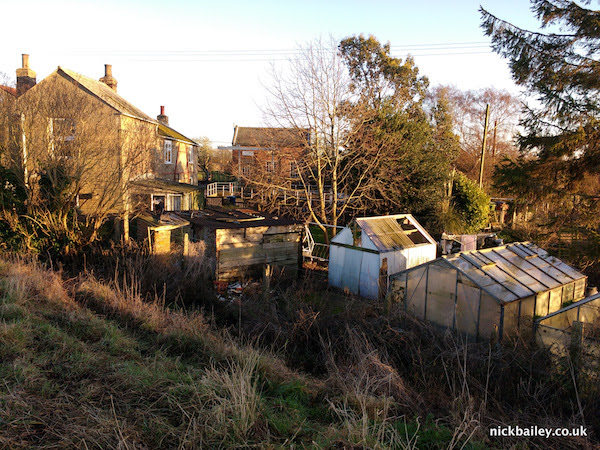 Much of the local architecture can best be described as "demoralising" 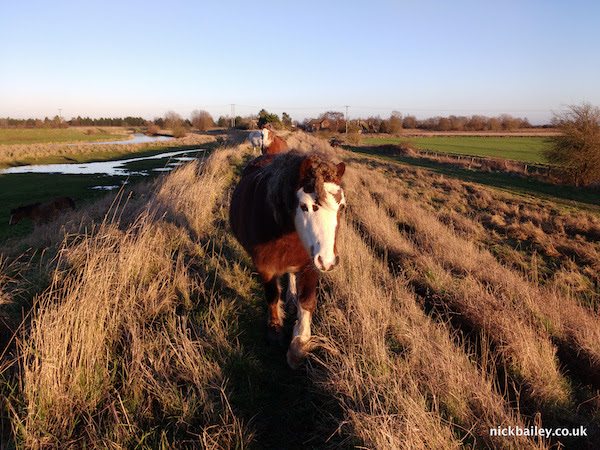 These pony/donkey/horses were somewhere between friendly and incredibly menacing

This evening has been rather successful. I finally got round to attempting this modification of my Moto G3 (3rd Generation) case. I had been planning to simply drill some random holes all over it to let the yellow shine through the otherwise rather dominant black case. But then I realised that I could make a pattern out of the holes. Rather nicely, Orion (which happens to be my favourite constellation) fitted really rather nicely. Win for me. 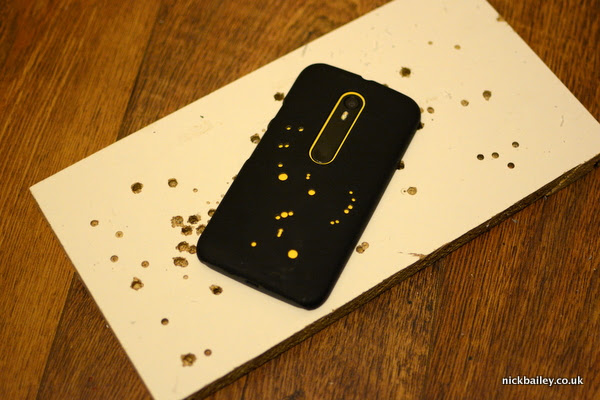 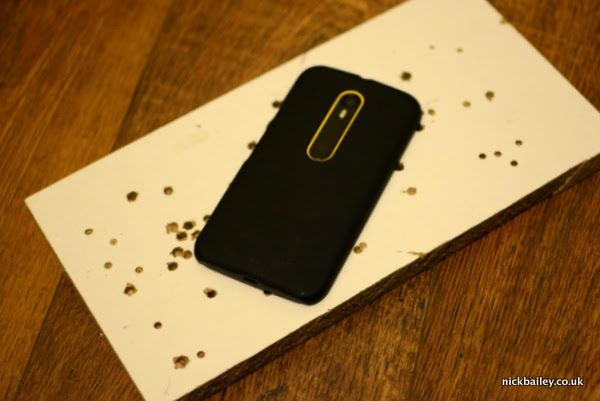 Before, just a black case on my Moto G3 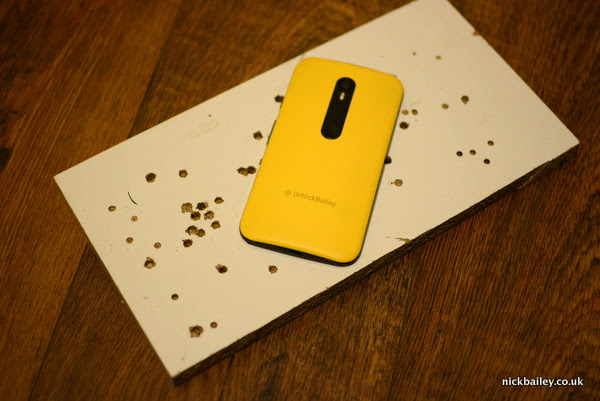 Behind the case is a rather stunning yellow body