I was a bit late for the Chelsea Chop this year, but this was the result. 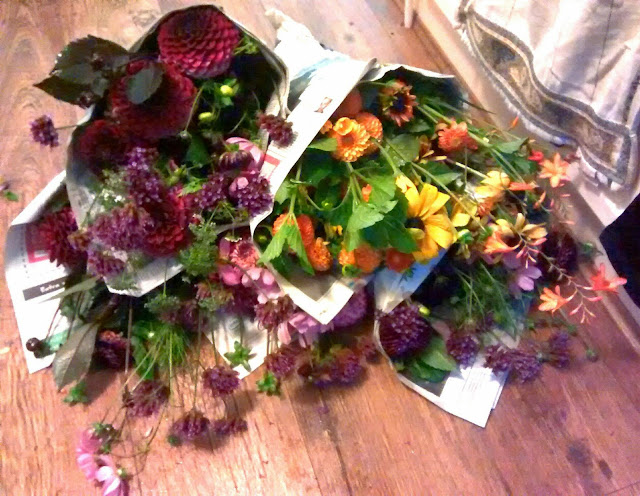 I went to visit our new cat who's presently residing in the local Cat rescue centre. We went last weekend just to have a look and ended up deciding there and then on one. They had quite a lot of black cats (as has been in the news recently), but we felt that actually a black cat will go quite well with our furniture (not to devalue the little critter). She is a 'He' and is currently called Sooty (though he might become a Schubert). This was my third visit and he was definitely much more friendly this time round. So hopefully when we get him home he'll only improve and get more friendly. He does rather enjoy fishing which could be some cause for concern amongst our friendly blackbird community.

turns out they're right, black cats really are hard to photograph

and a little bouncy

Sitting on my table in the sun this fly landed and started warming itself up on the ceramic surface. Out again with the camera and macro lens. At the other end of the garden I came across this bluebottle in the gravel. There my friendly neighbourhood Robin kept an interested eye on me from the fence.

in a little closer, the detail is glorious

This little bumblebee spent just long enough servicing the sweet peas (wild, so sadly not fragrant) that I was able to get a few shots of him. I still need to work on the aperture to improve the focus depth and capture more detail.

up close and personal

Heather Walk in The Peak District

Some photos of our walk in the Peak District with my parents. We were up in Sheffield of the weekend to celebrate the baptism of my cousins's children. The weather was simply glorious and it was so lovely to get out into some PROPER GEOGRAPHY. When I see hills I can see the point of living somewhere; in East Anglia the flatness makes life just that little more futile. As we drove out from Sheffield the heather was simply stunning, clothing the hills in a rich blanket of warm pink. Where we were heading - a ridge walk from Mam Tor - turned out to have no heather at all, so after getting back to the car and a quick refreshment stop in the pub, we drove back to find a heather patch to walk in and experience. It really was quite magical.

Vale of Edale to the north

Back Tor above Castleton

rather too friendly sheep

fields towards Eyam Moor and Hathersage

the nobly top of Win Hill above the Ladybower Reservoir

the heather of Bole Hill

Google is making me question the perfection of Jesus. It's frequently preached that Jesus was (/is) perfect. I've just had a quick check (ironically, using google) and come up with two results:

Matthew 5:48
Be perfect, therefore, as your heavenly Father is perfect.
2 Corinthians 5:21
For He made Him who knew no sin to be sin for us, that we might become the righteousness of God in Him.

The first half-implies that because Jesus is God and God is perfect that Jesus is also perfect, but it's not explicit. The second is written by Paul, so doesn't count. There might well be others, but most seem to be about his divinity which I'm not questioning here, just the perfection. Did he never check a girl out and thus commit mini-adultery in his mind? Really?
Why google is giving me reason to question this is that if something is perfect, or perhaps the more perfect something becomes or attempts to become, the less perfect it appears. With Google, it used to just work. They did one little thing really well, not perfect, just better than others. But now they're trying to do everything and seem to be under their own self delusion that they are the best at everything. You could just brush this off under the consideration that they have relinquished their earlier claims and simply become evil. But as a user, the more they have conquered each aspect of life and tried to second guess actions - pre-emptive searches, google now, map routes - all these things are essentially suggesting to us that they've got our back, they're always there with the answer, they're perfect.
But of course they aren't and increasingly little flaws which previously you would overlook on a rough object, become increasingly noticeable and annoying. The way google navigation speaks in an almost but not quite human way, the auto complete which fill out when I didn't want it (& the reverse), chrome spell check's inability to suggest "anti-aliasing" from "antialiassing", the blandness of their search results, the advertising of things I've just purchased. All these little niggles are getting more and more annoying each passing day. There is an analogy with computer generated animation - the closer they get to simulating reality, the more those subtle slight differences like the odd jerk of a limb, appear to break the impression. Whereas with a cartoon, Wile E. Coyote runs out over the ravine, pauses then falls - fine. Even with my blog posts now, I leave one spelling mistake and it breaks the flow, whereas before there were hundreds and all was good (fun at least).
Perhaps It's human nature to seek out flaws in others. Certainly people who give that impression of being perfect (confident, cleaver, happy all the time etc) really tend to grate on me. I fear that if I came across Jesus and he was this perfect individual then either the tiny flaws he did exhibit would stick out like logs in the eyes, or I simply wouldn't like him.
2014-08-20
Posted by Unknown at 11:25 0 comments

This chap landed in my garden at the weekend and hung on the clematis for ages enabling me to shoot far too many photos trying (and not quite achieving) the money shot I was after - the compound eye in crisp sharp focus. Hand held, I can't get the utter clarity I desire. Furthermore, when you condense the image to the web (from 6k to 0.6k) all the resolution is kind of lost. Still, more pleased with the results and realised that I need to switch to aperture priority more often and perhaps centre around 7.1 to give more focus range to capture with. Insects are just too small for fully wide apertures.

dragonfly on the clematis

lets have a look at those beady eyes

the best compound eye shot of the day

two wings with some lovely foliage shining through

this crop is a little filtered for the colours

and an arty dragonfly shot to conclude

It looks like my stigmata is flaring up again...

The Fog Of Things - FoT

Has anyone coined the 'Fog Of Things' yet? If not then I will. Clouds are isolated things which sit far away. Basically servers as far as I can tell. The Internet Of Things (IoT) is therefore lots of things things on the ground all talking to 'the cloud' (or clouds?). But some things on the ground might talk to each other not necessarily via a cloud. Therefore fog, unlike with Clouds, is all around us (at least when it's foggy). You can see the stuff right close by but for things further away you just have to guess as to their location, and in fact you perhaps don't need to know it's location as long as you can hear it. Ah, yes, fog obscures vision but not sound - that's another good analogous trait. I might start saying I'm working in the Fog Of Things, the FoT. What happens when the fog lifts - ah ha - the Drizzle of Things: the future state where we as unsuspecting humans (consumers) are bombarded with things after things measuring every bit of data that can possibly be extracted from us and our environment. Oh I can't wait for my fridge to tell me I need to buy more milk and stop eating so many pies.

This was the first boot of my new Raspberry Pi. I'd plugged it into the TV as a monitor along with a spare tiny keyboard and mouse. The lack of a MicroSD card was nearly a spanner in the works, but then I discovered one languishing in my old HTC Desire S. This was nearly scuppered by the lack of SD converter until I realised I could (with some trickery) connect the HTC to my Mac in order to format and copy over the NOOBS image successfully. Then install took 20 minutes or so by which time I was fairly tired and ready fo bed. Once booted I wiggled the mouse in Debian to prove success then shut down.

Still don't know how these happen, bit of a mystery.

Further Into The Light

When last in London I took some nice photos aimed into the sun. I was really pleased with the results captured, the exposure was such that the scene was visible but with some tremendous bleaching light effects. Not what I expected - with a crappy phone camera all you get is darkness with a bright spot. That\'s the joy of a proper camera. And so (when I remember) I've been taking more photos aimed into the sun rather than using the sun as a backlight. Here are a few recent results from Scotland.

green leaves of the horse chestnut

tall grasses in the evening light

my impression of a Brian Cox documentary

Why All The Flies Nick?

I was sorting through my catalogue of desktop backgrounds and found these three fly photos that I took back in 2005. Now with my new D7100 I thought it about time to try my hand again at some fly macros principally in search of the perfect compound eye shot. I've not made it yet, but I'm getting reasonably pleased with the preliminary results. More to come I'm sure, but to temper the files (which are otherwise getting a little too annoying in the house at the moment) there is a picture of a bee in flight (the focus is not particularly sharp I'll admit).

a rather cute blue bottle. I love the colours of the rock (2005)

sepia filter applied to this, but the eye is magnificent (2005)

this bee was visiting the morning courgette flowers (recent)